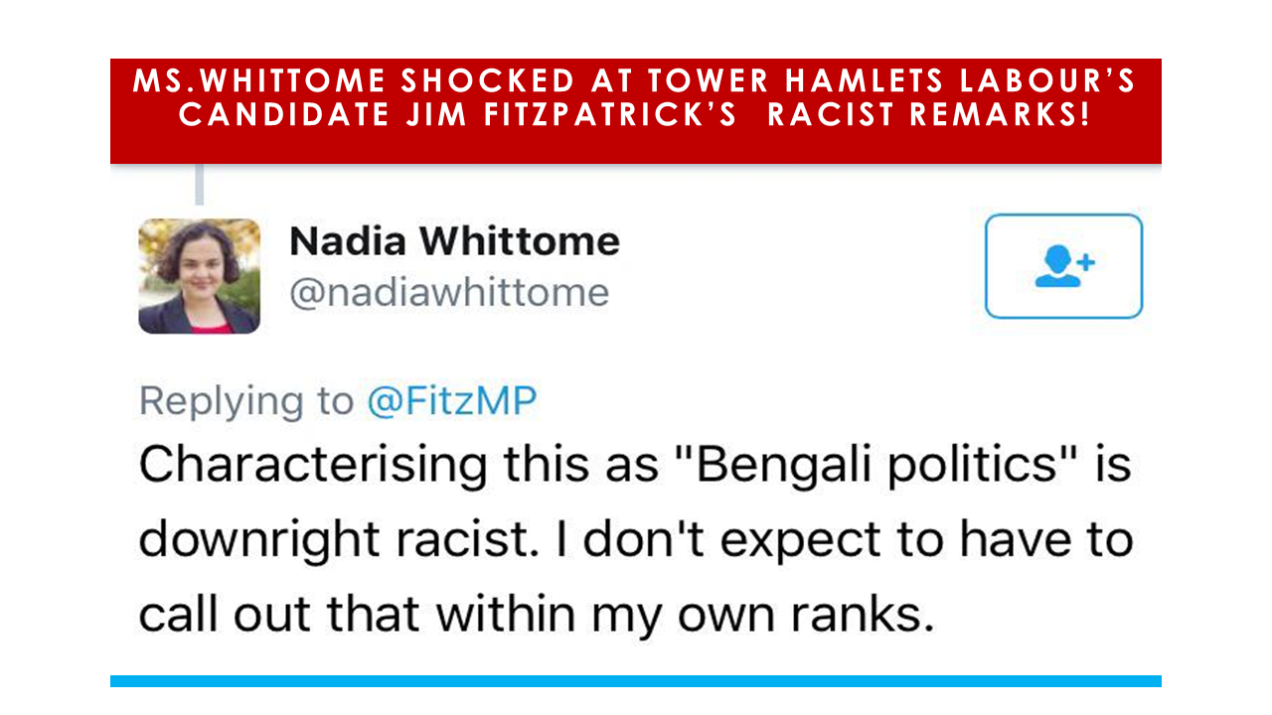 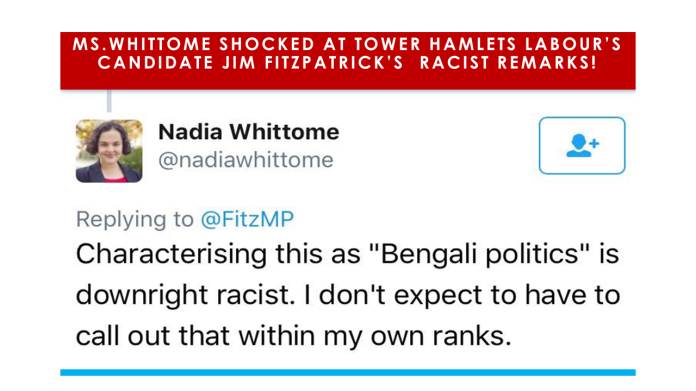 After Tower Hamlets Labour MP Jim Fitzpatrick’s racist remarks, It has been revealed that anti-Corbyn Tower Hamlet Labour Party Mayor, Mr Biggs, has now been publicly called out for his outrageous conduct: bullying, dictatorship & arrogance by his female Labour Councillor, colleague and Deputy Mayor. Previously, Baroness Paula – another female Labour colleague and Mr Biggs’s deputy some 20 years ago had made damning comments about him his conduct. The shocking revelations came to light after the Tower Hamlets Labour candidate in Poplar and Limehouse, Jim Fitzpatrick, was accused of using ‘racist’ remarks but the party has failed to take any action so far.

Ordinary Labour members and activists are appalled that Tower Hamlets Labour Mayor Biggs and its parliamentary candidate have not been suspended or at the very least reprimanded – like Ken Livingstone and others – until a full and proper independent investigation takes place. Many residents say that Labour must act decisively and urgently before it’s too late.

Despite the unprecedented public uproar and serious concerns from the local party members about these damaging incidents, neither Mayor Biggs nor the parliamentary candidate Jim Fitzpatrick, have issued any public statement, rebuttal or clarifications this far about the investigation or their extremely booted conduct.

WTP had requested both Mayor John Biggs and Mr Jim Fitzpatrick for their responses but no reply was received at the time of publication of this article.

Right-wing and anti Corbyn Tower Hamlets Labour Party leadership was ‘trying unsuccessfully to ride out the storm’ after being plunged into a fresh crisis over grave allegations of bullying, dictatorship, lack of regard for its party procedures, failure to consult, and for arrogant behaviour.

Sharia Khatun, a sitting female Labour councillor and a party colleague of Mr Biggs, who served as an important Cabinet Member and Deputy Mayor, has publicly made serious allegations with a comprehensive account of events accusing Tower Hamlet Labour Mayor John Biggs, and a thinly veiled attack on the Labour’s Executive Committee in Tower Hamlets.
In a scathing and shocking public interview, Cllr Khatun took the lid off the inside dealings of the Tower Hamlets Labour Party and its ‘dictator’ Mayor, John Biggs. The key allegations are: 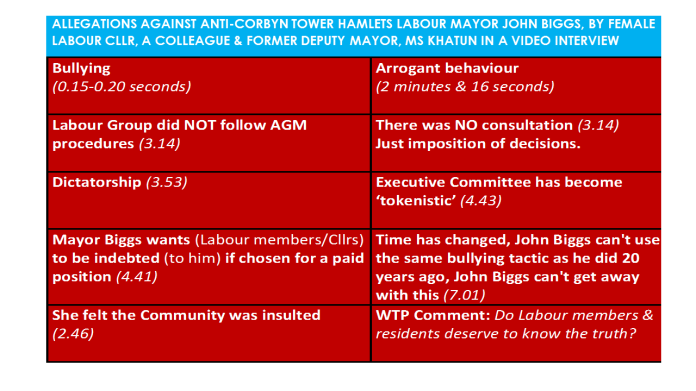 A loyal supporter of Mayor Biggs, Jim Fitzpatrick, who is currently a Tower Hamlets Labour party’s parliamentary candidate in Poplar and Limehouse constituency, branded the internal democratic challenge in the party as “Same old, same old worst of Bengali politics” insinuating that all those party members who support a democratic choice as prescribed legitimately in the Party’s own Rule Book were British Bangladeshis, which is not only untrue but reeks of racism.

This carefully orchestrated propaganda to support Biggs and sabotage Corbyn was not only factually incorrect but deliberately misleading based on evidence at party branch meetings where a cross-section of members, including a significant number of non-Bangladeshi left-wing members, openly supported the democratic choice and to have their rightful say on who should govern the borough and how should it be run under Labour.

Many party activists and supporters say that this bigoted remark by Jim Fitzpatrick was a calculated attempt by Mr Fitzpatrick and Anti-Corbyn Tower Hamlets Labour hierarchy, which includes Mayor Biggs, to shore up support and sympathy from their right-wing members and a section of the media, something they undertake before key elections and events to provoke white versus non-white debate – with unfortunate Islamophobic undertones in Mr Fitzpatrick’s case – which helps them consolidate their core right-wing voters, both inside and outside the party, against any legitimate democratic challenge or opposition by left-wing of the party and wider fair-minded people.

Mayor Biggs lost 50% of the popular vote among the grassroots – Labour Party Wards and Branches – but narrowly survived with help from the party affiliates amidst serious allegations of wrongdoing.

ANOTHER BLOW TO LABOUR

This is yet another blow to the beleaguered Labour Party in Tower Hamlets that has systematically crushed the democratic wishes and uprising of its members who feel let down by the performance of Mayor Biggs and its local MPs, its collusion with the local Tories. Left-wing and fair-minded members are against the iron grip of the right-wing elements in the local party but have nowhere to turn to currently.

Tower Hamlets Labour has been under ‘special measures for a quarter of the century’ so the local members do not have a ‘democratic say in their party affairs.

CLEAR PATTERN YET NO ACTION

This is not the first time and may not be the last that the Tower Hamlets Labour party has been under the microscope for the wrong reasons because the national Labour Party has failed to act decisively. The Party’s NEC and the leadership have been too scared and too timid in dealing with various claims of racism, plotting, bullying and harassment – some believe this is due to strong propaganda, interest groups and lobbying by local Anti-Corbyn MPs and local right-wing hierarchy and offer bearers, who controls nominations process as a bargaining chip and include candidates for the general election on June 8th, but others claim it’s because Labour fears the consequences and afraid to face real local democratic representation.

Jim Fitzpatrick, Party’s candidate for Poplar and Limehouse on 8 June who has been a Labour MP for 20 years, chose to make openly racist remarks but shockingly nothing was done, yet he is seeking re-election on a Labour ticket with impunity.

Remember what happened to Ken Livingstone for making an academic comment about the Nazis and Jewish people. Would Jim Fitzpatrick have got away with such remarks if he’d made them about our well-respected and hard-working Jewish community?

Even the Tories nationally did not tolerate such unacceptable behaviour, from one of their councillors, and suspended him from the Party when he used racist language against the Irish community recently. Some local brave souls pointed this incident out, wrote to the Labour party, spoke out at the Party’s General Committee meeting – only one decent Labour Party colleague outside of London publicly took Jim Fitzpatrick to task and you can read her response below.

Imagine if these comments were made by a white female councillor against an ethnic minority/BAME or a Muslim or Jewish councillor, will the Labour hierarchy and media act as is the case now – ‘do nothing’ about these serious allegations?

The silence is deafening.

But the question is, why?

Bullying, harassment, intimidation, cronyism and discrimination should have no place in our society – let alone in the Labour Party and this surely must upset ordinary and decent Labour party members who demand answers.
In Tower Hamlets Labour Party, these questions seem to have been hidden under the carpet for far too long. Baroness Paula had made damning comments about her time as Mayor Biggs’s Deputy Leader, which begs the question, does Mr Biggs has a problem with the female politicians of colour or politicians of colour in general who refuse to take orders from him? What is the truth, do people not deserve to know?

Considering Mr Fitzpatrick’s ‘racist’ remarks and now that the former Deputy Mayor, Cllr Shiria Khatun, has revealed these allegations in a public video interview – in the absence of any rebuttals, investigate action or clarifications from the Labour Party – many viewers and residents would not be wrong to conclude that institutional bullying and racism is still rife unabated in Tower Hamlet Labour party.

The recent incidents remind us, yet again, how the once treasured Labour brand and its mandate are being tarnished in the historic East End by vested interests controlled by Mr Biggs while certain right-wing Labour party members and politicians are being protected by a powerful clique even though they abuse and use the Labour rose for their benefits.

We have not even analysed Tower Hamlets Labour’s policy choices, budget cuts, broken promises and systematic collusion with the Tories in this piece which provide a compelling case that they have consistently acted against true Labour values and campaigned against its leader Jeremy Corbyn. No wonder more and more people now believe that, in Tower Hamlets, a vote for Labour is a vote for Tories and against real Labour values due to the influence the Tories and right-wingers wield over the Labour Mayor, Mr Biggs, because he came to power with their votes in 2015, and local party’s behaviour, Mayor Biggs’s policy choices and the brutal cuts demonstrate that unfortunate reality.

Tower Hamlets Mayor John Biggs and its parliamentary candidate for Poplar and Limehouse must come clean.

Most critically, Labour Party’s national leadership must formally investigate these hugely serious allegations to reassure residents and Labour Party members that ‘racism’ and ‘bullying’ has no place in Labour Party. This must be done outside the control of the local party hierarchy.

Labour Party must act decisively before the matters reach a point of no return.